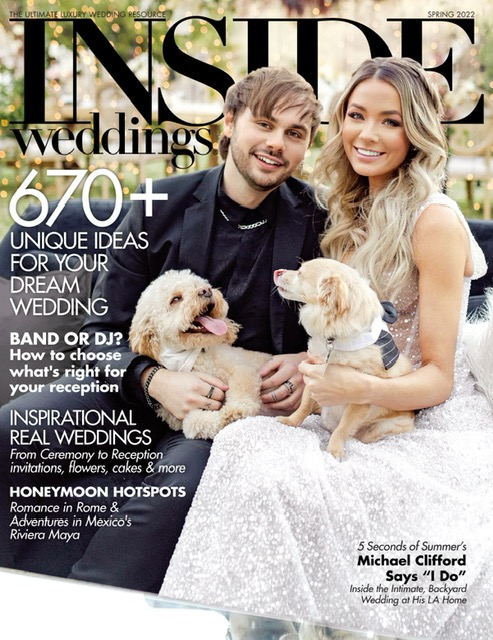 Anoush Featured in Inside Weddings

Read our feature below!

“You could say it was a cheesy story,” smiles Michelle Barghash when referring to how their love story began. She and Ernesto Saucedo first met during a brief exchange at work for a company where they both sold cheese. During that encounter, Michelle asked Ernie if he wanted to have lunch – that outing lasted several hours. “The conversation flowed so easily,” remembers Michelle of the day their amorous relationship began.

The pair was known to visit Disney resorts and parks often, so it wasn’t unusual that they’d booked a staycation for Fourth of July Weekend at the Disneyland Hotel. Slightly surprised their room wasn’t yet ready at check- in, Michelle suggested they spend time at the pool area. During this time, family and close friends were hurriedly decorating the Fairy-Tale Suite to perfection before the twosome finally made their way into the room. “He told me to take my blindfold off, and he was down on one knee and asked me to marry him. I said yes and kissed him immediately,” tells Michelle. “We finished off the night with our loved ones at the Napa Rose restaurant and went to Disneyland the following day. It was magical.”

Michelle and Ernie began planning an elegant wedding with modern, chic details, and they were mostly done with the process when Covid hit. After much discussion, the couple ultimately chose to postpone their celebration. “Luckily, we had a great vendor team that was very accommodating,” affirms the bride.

Hosting their nuptials at a stunning venue was a priority. Michelle and Ernie worked smart, carefully researching each potential site and watching YouTube videos prior to even booking a tour. Upon visiting a Spanish- style ranch, they fell in love with the alfresco setting. “One big thing for us was allowing a later end time since our families like to party!” reveals the bride. “They let us book until 2AM!”

Michelle and Ernie continued working closely together, along with their planner Hovik Harutyunyan of Harutyunyan Events. “I highly, highly suggest hiring a good planner. We would not have been able to have the wedding we did without him – from his relationships with other vendors to keeping us within our budget, Hovik really made the process smooth.”

The décor of the sunset ceremony was kept clean with a sophisticated vibe focusing on a color palette of black, grey, white, and gold, which Michelle felt would also allow for the awe-worthy natural scenery of the venue to be appreciated. A nontraditional dark-grey aisle runner illuminated with candlelight was surrounded by Ghost chairs, as well as striking tall floral arrangements set on black podiums with gilt accents. The bride walked down the aisle to Duomo’s cover of “Wildest Dreams” by Taylor Swift created for the hit Netflix show Bridgerton. She carried a lush mixed bouquet of white blooms, greenery, hellebores, Veronica florals, and anemones hand tied with ivory ribbon. “Walking down the aisle and seeing Ernie tear up even though there were 200 people there felt like it was just us in that moment,” reflects Michelle.

Though the couple had opted for a “first look” where they

shared handwritten vows, they were still extremely excited for their ceremony where they had chosen someone special to officiate: the groom’s uncle who is a pastor and also a mentor to Michelle prior to meeting Ernie. “He has seen our relationship grow, and we felt it was fitting since he is special to us both,” says Michelle.

The reception highlighted a similar romantic aesthetic. Hundreds of vanilla flowers, twinkle lights, and candles bedecked the space. Each glossy white table showcased a variety of arrangements to add depth and make it visually interesting. Adding to the décor was a two-tier ebony cake splattered in gold paint. The newlyweds planned to serve this delicious confection after the family-style supper where they arranged for additional slices to be available so that guests could enjoy multiple flavors, including: Cuban, strawberries and cream, tiramisu, and Chocolate Parisian.

As a nod to Ernie’s Mexican descent and Michelle’s half-Mexican, half-Lebanese cultures, the couple found ways to represent both heritages. The Mariachi Divas, a beloved all-female mariachi band that is also a frequent entertainment source at Disneyland, played throughout cocktail hour and dinner. Then, when the couple made their grand entrance, a traditional Lebanese zaffa was performed. “It was a surprise and an amazing way to be introduced with sparklers going off as we walked,” illustrates the bride. “Imagine watching Aladdin when they announce Prince Ali.”

Though they had to wait a bit longer to enjoy their dream day, it ended up as magical as they had imagined. The newlyweds danced beneath the stars with loved ones until early morning and grew excited for their mini-moon to Disney’s Grand Californian Hotel!