What Is Umami All About?

We were brought up believing there were four basic tastes: sweet, salty, sour, and bitter. What taste, then, was a grilled steak or a mushroom? Most of us never gave it a thought. But a bit more than a hundred years ago a Japanese scientist named that hard-to-define taste as umami (oo-MA-mee), and in the past decade it’s become the pet of chefs and food writers the world over.

The fifth taste, as it’s now being called, umami is usually described as a pleasant, satisfying, savory taste. It’s the kind of taste you find in meats, fish and fowl, in cheese, in green tea, soy sauce, truffles, corn, and winter squash, and in nuts like almonds and walnuts. Sometimes earthy, sometimes redolent of the sea, to describe it perfectly is almost impossible. In Japanese, it means “deliciousness” or, simply, “yum.”

How Do You Create Umami?

It’s that irresistible bit of chicken stuck to the bottom of the roasting pan, the tantalizing flavor of caramelized onion, the ultimate barbecued cheeseburger with bacon and ketchup. Even without being aware of it, we’ve been creating umami flavors forever just because they taste so good.

The recipe bases that so many cultures use in their cooking create umami to enrich whatever else goes into the pot. The French have mirepoix, chopped onions, carrots, and celery browned together in butter or oil, and duxelles, which is onions, shallots, and mushrooms sautéed in butter. The Italians sauté onions, carrots, and celery in olive oil and call it soffritto, and the Spanish, Portuguese, and Latin Americans have sofrito, which is typically sautéed onions, garlic and tomato. In the United States, Cajun and Creole cuisines use onions, celery, and bell peppers. No one thought “we’ve got to create an umami taste” for a sauce or a stew, but that’s what they came up with anyway. 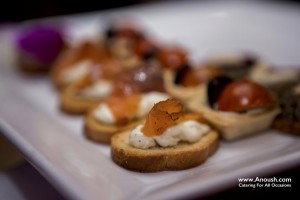 Modern chefs and catering in Los Angeles have been taking it even further, and finding new umami combinations to tempt the palate. The international food scene in Los Angeles is the perfect place to explore what’s new in this world of deliciousness.

What’s especially interesting is that even foods that have their own umami are doubly enhanced by cooking them with other umami-rich ingredients. A basic tomato sauce has umami, but its effect is multiplied if the sauce is cooked with mushrooms. And the process of roasting meats and vegetables amps up their umami exponentially.

How Food Gets That Umami Taste

What gives food that umami taste? It’s a natural amino acid and building block of protein called glutamate. For years, it was debated whether umami was a fundamental food taste, but the issue was resolved when scientists identified receptors on the tongue with no purpose other than to recognize the presence of glutamate, the same as there are special receptors for each of the other four tastes.

In evolutionary terms, humans adapted to respond positively to sweets because sweet foods are a reliable form of calories. We adapted to respond positively to salt because it contains minerals our bodies need, and we adapted to reject foods that were bitter or sour because those tastes warned early humans of foods that might be poisonous or spoiled. Many scientists believe that humans crave umami because it indicates the presence of protein.

In 1907, when chemistry professor Kikunae Ikeda found that the thing foods with that savory deliciousness he called umami had in common was high levels of glutamate, he created a product that made it easy to add umami to foods that didn’t come by it naturally, the same way we add sugar to make things sweet. He called the product monosodium glutamate, or MSG.

Many of us only know about MSG because it is routinely added to dishes in Chinese restaurants, though most of us don’t know what it was or why it is used. But we may not have been aware that it was and still is added to a lot of fast food and many supermarket foods like soup, chips, and macaroni and cheese because it pumps up the flavor without adding salt. It’s also the main ingredient in the familiar seasoning that many people use for home cooking. Even though no scientific link has been proven, some people believe that MSG gives them headaches, so a number of alternative products are now cropping up to replace MSG like artificial sweeteners replace sugar.

Without adding anything extra, though, many of the foods we enjoy are loaded naturally with umami tastiness. Sushi packs an umami punch with its fish and nori, but even the most basic homemade chicken soup is a golden bowl of umami. Yum! If you have any questions about catering or banquet halls in Glendale CA or Los Angeles fell free to contact Anoush for a free tour and pricing.