As Indian summers often delay the anticipated change in weather that signals the arrival of fall, many await pumpkins (and the ubiquitous pumpkin spice lattes) to herald the change of the seasons. Once grocery stores set up the gourds and squashes at door, the spirit for autumn leaves, Halloween ghouls, and pies begins to take hold.

At the market, I stroll past the giant 50-pound “big mac” pumpkins and the whitewashed fairytale pumpkins, and search for something else entirely. For me, fall doesn’t arrive until I see a flash of deep burgundy leathery orbs with miniature tufted crowns. No, not pumpkins at all, it’s that first crop of pomegranates that has me reaching for scarves and putting away the summer wardrobe. 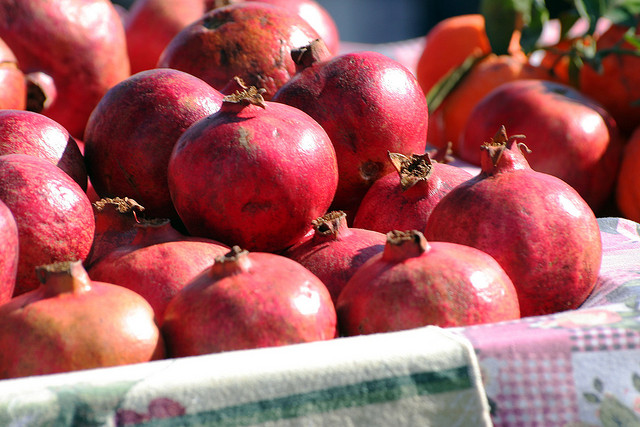 The fruit ripens at the very end of summer, arriving in markets usually on cue with the fall equinox. Underneath the red leathery skins, nestled in white protective membranes, lie hundreds of glistening ruby seeds. The taste of the fruit straddles the seasons, the tartness a preview of the winter ahead, the brightness a reminder of the summer just passed.

The pomegranate’s versatility in cooking rivals that of pumpkins. A syrup or molasses made from reducing pomegranate juice is the base for many Persian stews, and is perfect for glazing your Thanksgiving turkey. The seeds can be used to garnish salads and stuffings of all sorts. And of course there is always pomegranate wine.

While originating in the Middle East, the pomegranate is now grown around the world. It is an ancient fruit, widely depicted in Greek mythology and has symbolized both prosperity and suffering, fertility and abundance. The pomegranate is now prized for health benefits; being high in vitamin C and antioxidants it may slow aging, lower cholesterol and reduce inflammation.

Yet, fewer fruit require so much work for its reward. First you must carefully slice into the fruit, fully prepared for the juices to squirt everywhere. Then once halved, and then halved again, you begin to carefully break apart the segments from the membrane. The juice will mostly go everywhere, and when you find a splatter of red on a wall 10 feet away from your kitchen two weeks later, be assured it’s errant pomegranate juice.

If the peeling process wasn’t taxing enough, eating the fruit leaves you with a mouthful of seeds stuck in your teeth. As you bite down on the gems and feel the tart flesh of the aril explode around your tongue, the hard inner seeds nestle deeply into your molars. But the travails are worth it. Or you could always buy pomegranates pre-peeled and seeded. Or peel them underwater.

Pick up a few pomegranates at the market, and ponder them as the new harbingers of fall.